Black and brown bears congregate at the salmon spawning streams during salmon to gorge themselves on the bounty of fish choking the rivers. They always squeeze out the eggs with their jaws to extract the protein-rich eggs. I found black bears to be much more of a problem than brown bears because they were much bolder, and certainly very persistent trying to get to my food. On one occasion I climbed a tree and hung some dry bags out along a branch over the river as far as I could reach, but a black bear managed to climb up the tree, and reach out far enough to use its powerful paw and sharp claws to rip the dry bag away from the heavy-duty nylon webbing sealing the bag. Black bears (Ursus americanus) are the most abundant and widely distributed of the three species of North American bears. An estimated 100,000 black bears inhabit Alaska. The black bear is the smallest of the North American bears. Adults stand about 29 inches at the shoulders and are about 60 inches from nose to tail. Males are larger than females, and weigh about 180-200 pounds in the spring. They are considerably lighter when they emerge from winter hibernation and may be about 20 percent heavier in the fall when they’re fat. Black bears can vary in color from jet black to white. Black is the color encountered most frequently across the state, but brown or cinnamon-colored black bears are sometimes seen in Southcentral Alaska and on the southeastern mainland. Cinnamon-colored black bears are also common in Alaska’s Interior. Some bluish-colored bears called glacier bears may be found in the Yakutat area and in other parts of Southeast Alaska. Black bears often have brown muzzles and some also have a patch of white hair on their chest.
Black bears are most easily distinguished from brown bears by their straight facial profile and their claws, which rarely grow more than 1 ½ inches in length. Black bears have adequate sense of sight and hearing, but have an outstanding sense of smell. 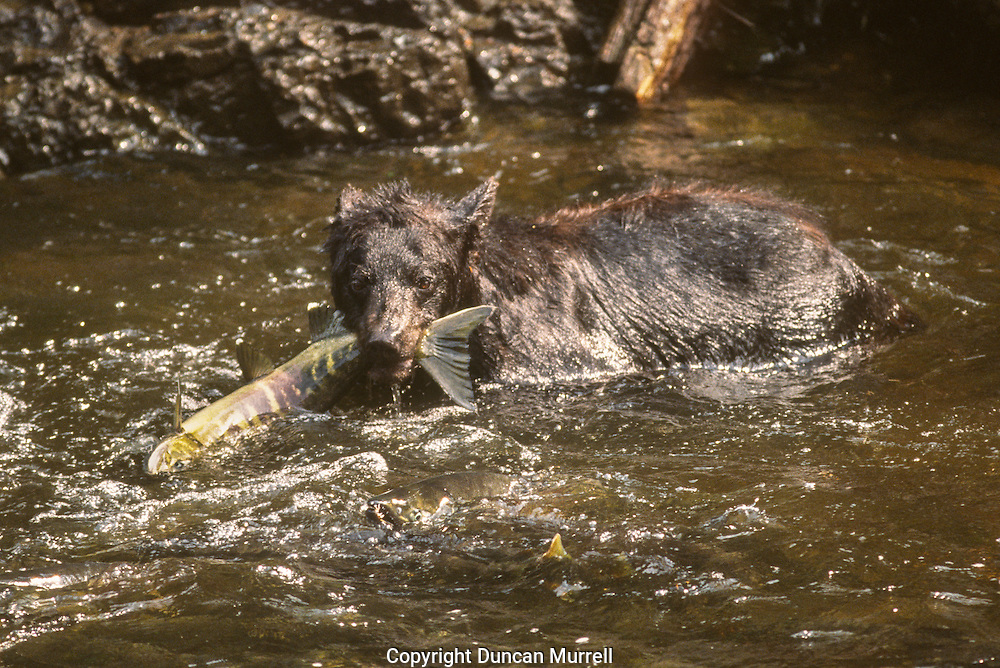