Between mid-November and March is when moose typically lose their antlers; younger moose keep their antlers until later in the winter and it is usually only two year old moose that may still be adorned with their antlers come March. Moose are the largest living member of the deer family (Cervidae) and fittingly bear the largest set of antlers. Moose antlers are usually paired and shaped like the palm of a hand with outstretched fingers, thus the expression palmate. After a male moose reaches one year of age he starts to grow antlers that increase in size becoming more elaborate with more points and heavier for each new set of antlers he grows until he reaches his prime. After a male (Bull) moose reaches his prime the antlers start to recede each year until the moose dies. Every year the cycle is the same. In the spring antlers begin to grow from the skull covered with a tissue called “velvet”. By September the growth has completed and the velvet dries and falls off. Moose will often aid the removal of the velvet by rubbing their antlers on trees and shrubs (on occasion they’ll eat the velvet too!). The continuous rubbing on trees, combined with the dried blood and dirt will give the Moose Antlers the brown colour in the fall. They do not serve a useful purpose until the fall and during the mating season (called the Rut).
This was during one of my best winter experiences in Southeast Alaska. There was such a great feeling of wildness and solitude up in Adam's Inlet. Very few boats go right up into Glacier Bay during the winter, and certainly not deep into Adam's Inlet. It was so peaceful up there in winter. It has always been my dream to spend a whole winter camped with the moose and wolves up Adams Inlet. 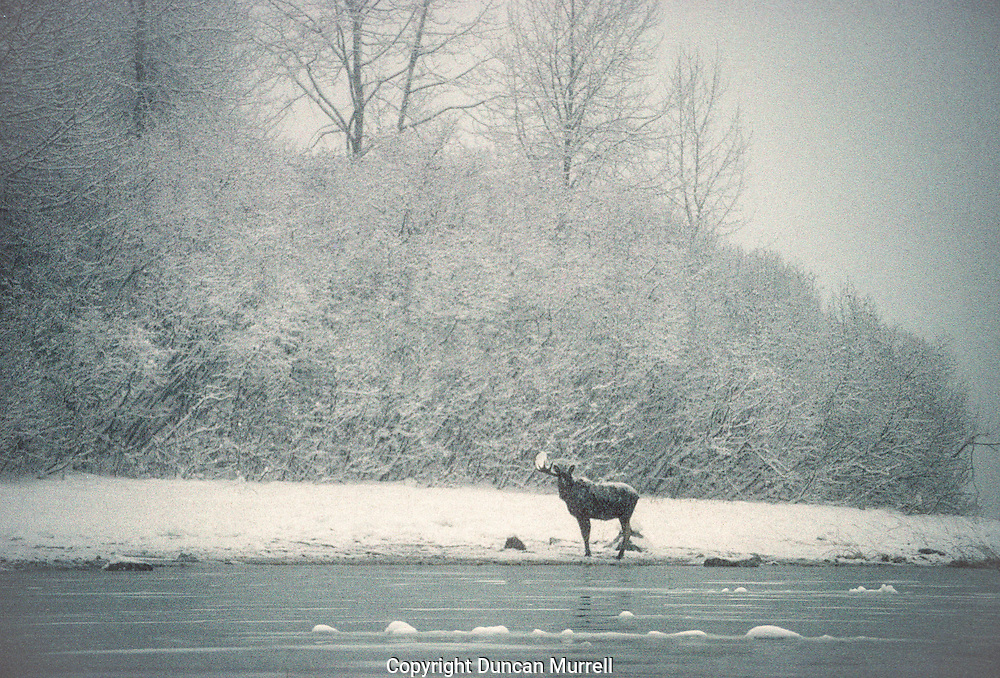