There is a greater density of brown bears on Admiralty Island in Southeast Alaska than anywhere else in North America. Brown and grizzly bears are classified as the same species even though there are notable differences between them. ‘Brown bears” typically live along the southern coast of Alaska where they have access to seasonally abundant spawning salmon. The coastal areas also provide a rich array of vegetation they can use as food as well as a milder climate. This allows them to grow larger and live in higher densities than their “grizzly” cousins in the northern and interior parts of the state. Brown bears are also larger than black bears, have a more prominent shoulder hump, less prominent ears, and longer, straighter claws. Long claws are useful in digging for roots or excavating small mammals, but are not efficient for climbing trees.
I used to visit this area frequently because there was a well-known man called Stan Price who lived in harmony with the bears in nearby Pack Creek for many years; I enjoyed listening to his bear stories. On this particular occasion I received a wake-up call not to approach the bears too closely. This bear was chasing salmon in the shallow streams and I wandered too close while my eyes were confined to the viewfinder of my camera. It suddenly turned its attention from catching salmon to me and started to walk towards me. When the walk became a canter I realized that I was in trouble so I stopped taking photos and lowered my camera. I froze to the spot and as the pace of the bear increased my first instinct was to point at and shout in a very loud, commanding voice “ Go back!” My voice echoed around the steep walls of the valley and fortunately for me the bear obeyed my order; it slammed on the brakes, snarled at me one last time and then ran away through the tall grass.
Like many other animals, particularly immature males, bears will often make a bluff charge to protect their territory but I wasn’t sure of that at the time! 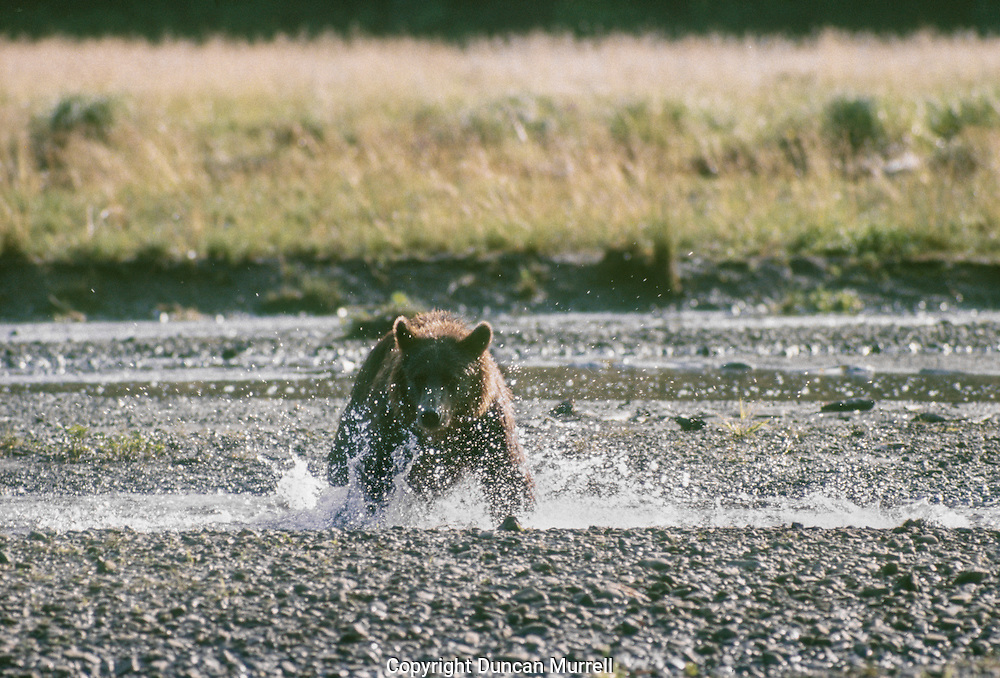